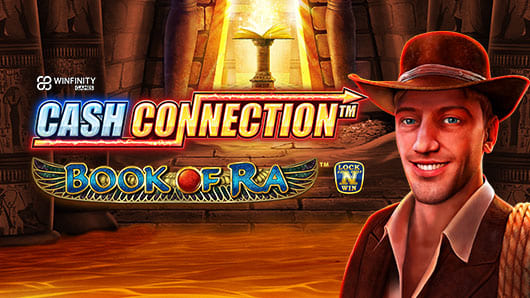 We offer you a new sequel to the most popular in the world of online casinos slot - Cash Connection Book of Ra, augmented with the option of Lock and Spin, which includes up to 4 jackpots. This online game is based on the well-known Book of Ra Deluxe, the company Novomatic has made every effort to make this game special.

Theme of the online slot - ancient Egypt, where you have to go into a mysterious world of mythical creatures, tombs covered with gold and ancient books, which kept secret treasures. The action unfolds on a standard 5x3 field with 10 fixed paylines. Graphically the slot is slightly updated compared to the Deluxe version, when you enter the game you find yourself inside a majestic tomb surrounded by columns covered in hieroglyphics and a path leading to the book of the Sun God. The low-paying symbols are the traditional 10, J, Q, K and A. The middle-paying symbols are represented by Ra and the Egyptian Beetle. The Pharaoh is the highest paying standard symbol and the Wild and Explorer symbols can increase your stake up to 500 times. The bonus symbol is a gold coin with a book imprinted on it, and landing on the reels of 6 of them activates the bonus game "Lock & Spin" .

The main difference between Cash Connection Book of Ra and other variants, is the bonus game. In order to run the free bonus spins, you need to collect at least 6 symbols of coins out of 15 possible in the standard game. Once they are won, the Lock and Spin bonus game will be activated where you can win 4 jackpots in addition to the cash prizes. The bonus game will consist of 3 rounds and is limited to a set of coin symbols within them. Each coin symbol has its own value, which can be from 1 to 100x your bet, and can also hit you with jackpots. Each new coin that appears on the screen during free spins brings the number of free games back to 3. And so until the coin symbol no longer appears, or until you fill the entire reel with coin symbols. At the end of the free spins bonus, the total amount of winnings in coins is summed up and added to your balance.

The Mini and Minor are fixed jackpots and are worth x10 and x50 of the total bet, the Major and Grand are progressive and consist of 0.95% of the bets made by players and can reach very high values.

We're sure that the Cash Connection Book of Ra online slot is one of the most modern creations of this incredibly popular saga from Novomatic. Go for treasures in ancient Egypt with CASINO777!