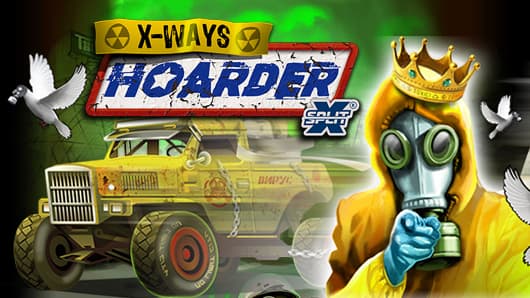 The online gaming company Nolimit City has released a slot for online games in which you will play a rather unusual theme you have never seen before, and in a somewhat futuristic scenario. A review of xWays Hoarder xSplit could start with the same words the developers use to describe it - collect all the toilet paper you can, buy a gas mask and steal the darnest car you can find. Now you're ready to play!

xWays Hoarder xSplit will send you to a not-too-distant future where a dungeon bunker has been created for the survivors of the nuclear apocalypse. The game comes to life on a grid with 5 reels and offers from 243 to 95760 ways to win thanks to xWays and xSplit mechanics. With only 13 symbols in this online slot, the highest paying symbols are the main characters in the story such as, Karen Hovenberg, Moonshine Michael, Terry Thrash, Dr. Duane and Gordon Geiger, with the latter being the most generous and paying out 5 times the bet for five of them in a combination. Items useful for survival, including a roll of toilet paper, are characterized by the lowest value. Combinations are paid only if they are made from left to right.

Features and mechanics of the online game xWays Hoarder xSplit:

The special symbols of this slot are definitely the xSplit Wilds, which function as jokers and replace the regular symbols on the reels, and thanks to the xSplit mechanics, the adjacent symbols on their left side are separated into 2 separate corresponding and icons. This particular symbol will only be able to land on the last 3 reels in the main game, and if one of these symbols is split multiple times, a multiplier will also appear, with the value doubling after any further splits.

Meanwhile, xWays symbols can appear randomly only on the 3 center reels and can turn into any symbol, which means winning, but above all, increasing the number of ways to win. To activate the free spins bonus, the so-called bonus raid spins, you will need to get 3 or 4 Scatter symbols at the same time. By doing this, you will get 7 or 10 free spins. Scatter symbols can appear on all reels except the first reel. This feature spins Bunker Raid with "sticky" xWays symbols and new ones appearing that give extra spins.

Free Bunker Raid Spins can be activated in the same amount thanks to the super Scatter symbols. At this point it will always play in the last bunker, and this will be done by xWays symbols that become "sticky" and need to be collected to increase the level, where you will find yourself playing with higher value symbols. As you scale your level, the lower value symbols will be removed from the game grid.

When you reach level four, the Wasterland free spins feature is activated, with only four symbols in play and 9 xWays symbols combining to form a Mega symbol that can bring huge payouts for each free reversal.

xWays Hoarder xSplit by Nolimit City is a very dynamic online slot, and while it may seem complicated, it guarantees an enjoyable gameplay in the end. Visit the dystopian concept of the future in a completely bizarre direction at our online gaming casino - CASINO777.