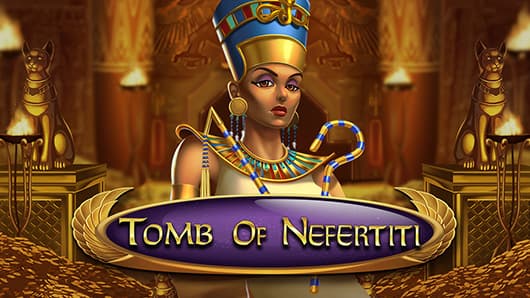 Based on the story of the mighty Egyptian queen, the online slot Tomb of Nefertiti takes you on an exciting adventure in search of her riches. Enter the tomb to find multipliers, sticky Wilds, re-spins, random symbols and free spins.

The Egyptian theme has long been a popular one among online slot players. Tomb of Nefertiti doesn't have the most advanced graphics, but the visuals are well designed and make the slot very interesting. On the reels you will find many Egyptian symbols: vases, cats, scarabs and the gods Anubis and Ra. The reels are painted gold and stand between huge columns showing the size of the entrance to the tomb. The edges of the reels are covered in a blue and gold pattern that is often found in Ancient Egyptian culture, which only confirms this slot's place in the "Egypt" category.

The Raider, which looks suspiciously like Lara Croft, is Sticky Wild and substitutes for standard symbols to help you create a winning line. The Wild Raider feature can appear randomly during any spin. When this happens, up to 9 random Wild symbols can appear on the middle reels to help create winnings.

The Curse of Nefertiti feature is another random feature, when the middle reels, will spin and show the same symbol. This means that if the same symbol appears on the first and last reels, you could be in for a potentially huge win.

The final feature is Raider Spins. It is triggered when 3 or more Nefertiti bonus symbols appear on the reels. You get 10 free spins for 3 bonus symbols, and another 5 for each additional bonus symbol. During the feature, the 20 paylines increase to 40, and the Wild Raider feature also comes into play.

In the upper right corner there is a Win Respins counter. Each time you get a win, the winning symbols automatically repeat, giving you another chance to win. The counter increases with each win, and the multiplier can be as high as 3x. However, there is no limit during Raider Spins.

If you're a fan of ancient Egyptian culture, you're sure to be captivated by the amount of detail and top-notch animation in Nefertiti's Tomb, whose symbols give a true insight into the world of the pharaohs.