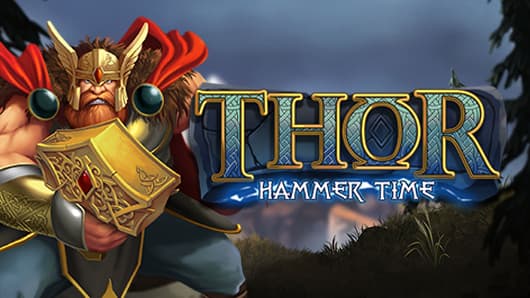 Thor: Hammer Time is a stunning online gaming slot based on the theme of Norse mythology. There are 4 exciting extra features and a special Scatter that collects re-spins to win coveted Asgard Spins. The randomly triggered Rune Raze and Hammer Time features are sure to boost your balance along with Thor's Lightning Bonus - get ready to smash the northern kingdoms with Casino777!

Thor: Hammer Time is as good as it gets for a Viking. The reels are set against a pine forest backdrop, and the symbols include all sorts of runes as low value symbols. The high value symbols consist of weapons and armor, including axes and helmets, as well as chalices and metal rings. Thor's hammer is the most valuable symbol. It gives a 15-fold increase in the bet when five symbols fall on a payline.

Rune Raze feature - Can strike at random on any spin, all the rune symbols turn into one new symbol to help you get a generous prize.

Hammer Time Feature - This feature is triggered randomly. All high-value Norse-themed symbols turn into a payable Hammer. The payout is then calculated.

Scatter Energy Collection feature - this bonus is triggered when you get two or more Scatter symbols. The Scatter symbols are fixed in place while the others are re-spun so that you have a chance to get a third Scatter and trigger a round of free spins.

Asgard Spins - You'll get 12 free spins during which all sorts of modifiers can be activated, including multipliers and blocked jokers.

This is a first class interpretation of Norse myths and legends. The graphics are superb and the breathtaking soundtrack matches the epic theme. The variety of add-ons is also great enough to make this online slot a perfect choice!