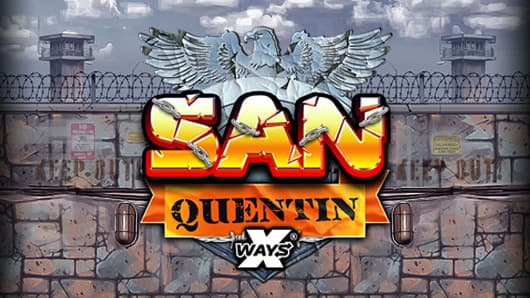 One of the most famous prisons in the world is undoubtedly San Quentin Prison, just north of Los Angeles, California. This is where East Row, death row, is located, although sometimes the death penalty can be less frightening than the idea of spending years locked up here, given the amount of assault, violence, and humiliation that occurs every day.

Nolimit City, the software company behind the online slot San Quentin xWays, has managed to convey all the adrenaline through fabulous graphics and original gameplay that will allow you to achieve fabulous winnings.

The game grid is delimited by five adjacent squares, for which the prisoners move. On the sides is a video surveillance system, and in the background are walls with barbed wire and turrets on the horizon. The music is fast-paced, typical of action movies, and there is a lot of animation in the game. On the left side of the screen are the Play, Autoplay and Turbo buttons, and on the left are buttons to change bets, to access the menu and to mute the sounds.

Symbols and additional features of the San Quentin xWays slot:

The game grid has 5 reels and 3 rows, in fact there are 2 more rows at the top and bottom, divided into cells that open under certain conditions. There are at least 243 winning combinations, and bets range from a minimum of €0.20 to a maximum of €24.

There are 16 symbols in the San Quentin xWays online game, all of which have a prison theme. Starting with those with the lowest value, we have toilet paper, handcuffs, razor brush and screwdriver, zippo and soap. The most valuable symbols, however, are the prisoners, five in all. The watchtower symbol is a bonus symbol and when it appears it opens the cells of the corresponding reel, behind which we can find one of the prisoners or one of the 3 special symbols: the razor, which will split all the symbols on that reel in half, the Wild symbol with the joker function and the xWays symbol, which will open 4 random symbols.

During normal play, the Split Wild symbol can also appear, which splits all the symbols on the reel in half.

Three Bonus symbols are required to activate the special Lockdown Spins feature. In this case, the cells at the top will open and one of the special symbols will appear each spin. Before the start of the game you will also be shown a multiplier valid for all free spins. During Free Spins mystery symbols will appear on the reels, which will determine the additional multiplier. Another special symbol during Lockdown Spins is the Jumping Wild, a special joker that randomly jumps from position to position.

Play San Quentin xWays online slot at our online gaming casino - CASINO777, activate the promising features and make the most of your impressive chances to win!