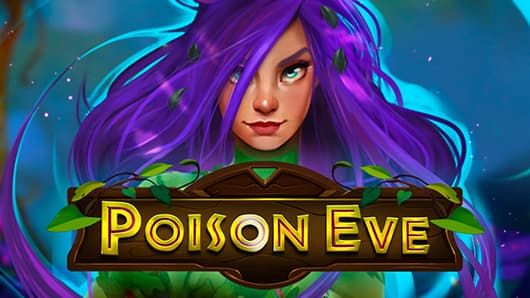 Ladies and gentlemen, discover Poison Eve, an online slot with a magical fantasy theme by Nolimit City. The slot has five reels and 20 paylines, and also offers players a very large winning potential. The online game offers three reel modifiers that include two expanding symbols, which include a Wild symbol, a transformation symbol, a Hot Zone, and a special field that moves throughout the set of reels.

The gameplay unfolds in a mysterious forest, and the graphic design is presented in a cartoon style. Slot symbols include card symbols A, K, Q, J, 10 and four potion bottles of different colors. The highest paying symbol is the enchantress Eve. Five of the same symbols pay out 100x on the winning bet. A red vial pays 25x on the winning bet, a yellow one pays 12.5x, a blue one pays 10x and a green one pays 7.5x. Each of the results shown here refers to five matched symbols, which can be replaced by a Wild symbol on one, two or three occasions.

Vine Wild - Poison Ivy, appears on the middle three reels, expands and covers the entire reel, rewarding you with a Wild reel.

Liquid Magic - activated when the Enchantress Eve symbol lands completely on the first reel. In this case, all the potion bottles will turn into the Eve symbol. If all 5 reels are filled with Eve symbols, you will receive 2000 times your bet.

Flower Power is activated when a pink flower (Scatter) symbol appears on the fifth reel in the square called Hot Zone. In this case, on the leftmost reel portal opens, which remains so from 3 to 12 spins, and any additional bonus symbols will give you more portals.

From 3 to 12 free spins are awarded at random - the symbol appearing on Hot Zone will expand and fill portals on reels 1 and 5. For example, if Eve lands on a Hot Zone point, it will occupy both reels. Payouts are awarded for symbols on the reels - they don't have to appear on the payline.

If Eve lands on any of the other three reels, it will expand to take over the reel - making it much easier to fill the reels with the same symbol. Make sure the bonus symbol lands in the Hot Zone, as another portal is added and more free spins are awarded.

Join the fairytale journey with Poison Eve today and don't miss your chance to win big at our Casino777!