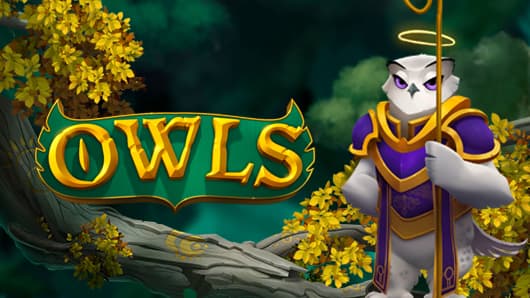 Deep in the forest, wise old owls are gathering to protect their kingdom. Will you be able to do your part and walk away with the treasure? Owls is a magical five-reel online slot with 15 paylines from Nolimit City. With betting options ranging from €0.15 to €15 per spin, you can play this breathtaking slot on all devices. It has plenty of bonus features, including three free spins bonus options and several lucrative Wilds on the center reel. With beautiful graphics and really exciting gameplay, Owls definitely deserves your attention.

The reels of the online game are transparent and the symbols fall on a background of a fairytale forest clearing. Autumn leaves are down and the Guardian Owl, glowing with purple and gold light and holding his golden staff, stands guard on the reels, ready to activate the spins Dream. The atmosphere in the game is absolutely magical, and this is largely thanks to the soundtrack, which has a truly cinematic sound.

In this slot you can see symbols such as: a spiral symbol, a chest, a leaf, a book, a sword, ice chips and three owls which are the highest paying symbols. The owls in the game are presented in a fantastic variety: the emerald grove owl, the ice warrior owl and the mystical guardian owl. The Wise Elder, an owl in a red cloak, is the highest paying symbol, which offers you 33.33x your bet, for 5 on the payline. There's also the Wild symbol, which is shaped like the golden shield of the protector and substitutes for any other symbol.

Where the owls really shine is in the series of bonus features. These are activated if a fully visible Guardian Owl Scatter Loot symbol appears on the third reel. This allows for the following bonuses:

Scatter Loot: The feature is activated when a full stack of the Scatter symbol appears on the middle reel. The payout amount is determined by the number of other symbols that appear on the screen and in combination with Wild symbols can form combinations of 6 and 7 symbols.

Dream Spins: The feature is triggered when Scatter symbols appear on reels 2, 3 and 4. You will then play 1 of the next 3 extras, each of which gives 5 free bonus spins. In all cases, the middle reels will be filled with stacked Wild symbols everywhere:

Amber Dream: during this feature, a shard of flame and a chest of flame turn into Wild symbols, and a stacked Wild symbol of a flaming owl appears on the center reel.

Emerald Dream: During this feature, any Emerald Shard or Book symbol turns into a higher paying symbol, the Emerald Grove Owl.

Frost Dream: during this feature, the ice owl warrior, ice shard and sword will turn into the most common Frost symbol during each spin; if the number of all symbols is equal, the symbol with the highest value will be selected. As with the other bonus features, the Wild symbol of the Ice Warrior Owl remains on the center reels everywhere.

Join this magical world right now at our online casino Casino777. Place your bets and spin the reels, a number of special bonus features await you, which, when activated, can lead to a payout of 1,374 times your bet!