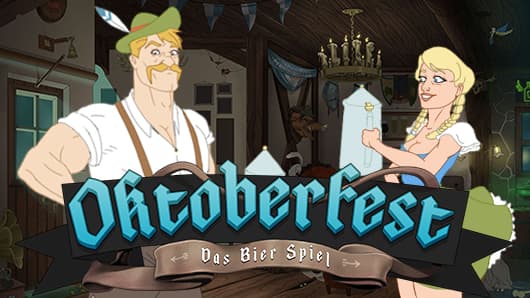 If you like beer and online games, then there is no doubt that you will love the Oktoberfest slot from Nolimit City. The action of this game takes place in a beer hall in Bavaria, where Oktoberfest is in full swing. You'll see beer glasses, flags and banners, beer kegs, horns and more spinning on the reels, and you can also get a number of random bonuses, free spins and no less than four different jokers! In other words, there's more than enough reason to celebrate, especially during Oktoberfest!

The action of the game takes place on 5x3 reels with 20 paylines. Oktoberfest has four Wild symbols, and all of them can substitute for the other symbols in the game, except the Scatter symbol. At the same time, these Wild symbols are different because two of them have the additional feature of Prost Spins.

Prost Spins - The feature is triggered when the Wild symbols Gretchen and Hansie completely cover the second and fourth reels. The Prost Wild will move during the spin to provide decent winnings.

Bierspins - Three Beer Glass Scatter symbols trigger the Free Bonus Spins feature, during which your winnings can be increased by up to 5x.

Party Spins - This feature is activated randomly during the base game and is accompanied by symbols such as Hat, Horn, Sausage and Beer Barrel which are stacked into each other.

Pretzel Party - the feature is activated randomly during the base game, all cards from Ace to Ten become Wild symbols.

No need to wait until fall, the holiday can start right now. Place your bets, spin the reels and head to Oktoberfest at our oldest casino in Latvia, Casino777!