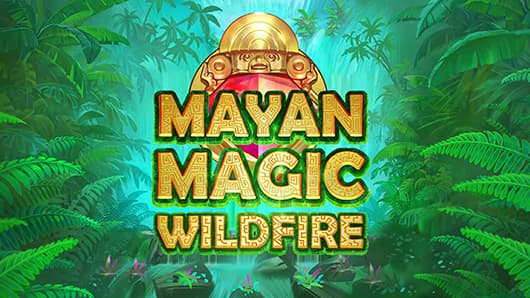 The jungle of Central America is the setting for Mayan Magic Wildfire, a colorful 5-reel, 10 paylines online slot from Nolimit City with payouts in both directions. Wild territory plays a key role in this rainforest adventure. Play on all devices from €0.10 to €50 per spin.

Mayan Magic Wildfire is a video slot with five reels, three rows and 10 fixed lines, paying both ways from left to right and right to left, so they actually double up. When you open the game, you'll find yourself in the middle of a lush jungle with a waterfall in the background. The game's frameless window appears to be suspended from a stone structure with a green gem in the center, which will play a key role in one of the features. Sophisticated graphics and rich colors dominate the reels, along with a tribal-style soundtrack that heightens the tension. The five members of the royal family: the queen, king, shaman, jaguar and snake represent high value symbols, while the gilded jewels in red, blue, purple and green are of lesser value.

Mayan Wild is triggered when a Wild symbol appears on reels 2, 3 and 4; the middle position on reel 3 becomes Sticky Wild and you get a re-spin. Each additional Wild symbol will trigger another re-spin. One Wild symbol out of three increases the win multiplier by 1x.

The Mystery Wild feature is triggered randomly, and the symbol in the middle position of reel 3 becomes a Wilds symbol along with any other symbol on reels 2, 3 and 4.

Mystery Sync can also be triggered on any spin, and reels 2, 3 and 4 will be synchronized so that matching symbols appear on each line, increasing the likelihood of big winnings, especially since paylines pay out in both directions.

Explore the fascinating world of the Central American Jungle at our online gaming casino, Casino777, and come back with big winnings!