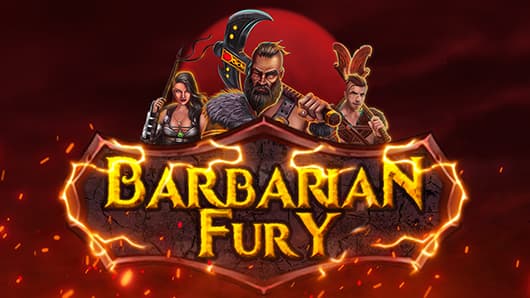 While many modern slot games focus on flashy graphics and complex bonus features, there's something to be said for the classic simplicity of traditional touch-based gaming. Barbarian Fury xNudge® takes that concept and gives it a brutal twist, resulting in a more engaging and potentially rewarding game. The mechanics of xNudge offer great potential, especially in the main game and bonus games, Barbarian Respin and Fury Spins. With the reintroduction of the wild multiplier feature in xNudge®, players have a better chance at majestic rewards. So if you're looking for a slot game that offers something different, be sure to check out Barbarian Fury xNudge®.

In Barbarian Fury, Nolimit City takes players on a journey to the Dark Ages, where man confronts the forces of nature. The game features very fluid gameplay, with forced moves that can lead to huge multipliers. But will this epic adventure piss you off? Only time will tell. The game's design is impressive, and the potential for explosive victories is enormous. So put on your armor and get ready for a battle you'll never forget.

Barbarian Fury is set against the backdrop of a winter forest. It's a bit reminiscent of Game of Thrones, which is always a good thing if you're a fan. Fantasy-themed slots require exciting orchestral accompaniment, and Nolimit City has provided enough exciting accompaniment here. The great orchestration blends well with the epic theme. The game's interface is nice and simple. It's easy to follow what's going on, and the functions are easy enough to understand. It is worth noting that there is no free spins feature in the game. This may disappoint some players, but it does not negate the overall experience of the game. Barbarian Fury is an exciting and well-designed game that will keep you coming back for more.

The symbols of the lowest denominations from A to 10 are depicted on wooden shields, which is a nice touch. The most innovative symbols are the comic book style barbarians. The best symbol is the red barbarian in a kilt, which pays 10 times the bet if 5 symbols appear on a payline.

The big brown bear is the game's wild symbol. It performs all the usual replacement functions and substitutes for all the usual symbols when it becomes part of a winning combination. The wild bear is different because when it appears, it turns the entire reel up or down into a wild symbol. This gives you more opportunities to create winning combinations, and also means that all wins involving the wild bear are doubled. Considering that the wild bear can appear on any reel and replace any other symbol, it's no surprise that it is one of the most valuable symbols in the game. If you are lucky enough to get 5 wild bears on a payline, you can win an incredible 250 times your total bet.

Barbarian Fury mobile slot is available on both iOS and Android devices, and it looks great on small screens. The visuals are sleek and expressive, and the game's orchestral background track sounds fantastic through headphones. If you play through the cell phone speaker, the soundtrack will be lost, but even without the sound, the game is enjoyable. Overall, Barbarian Fury mobile slot is a great choice for gamers who want to play on the go.

The Barbarian Fury slot plays one of the most important roles in the game. It's a bit of a distraction, but it speeds up the action quite a bit. You can expect regular re-spins with barbarians and diving wilds. We found the payouts to be a bit of a drag. It's a similar story with the Fury Spins feature, which can turn out to be a feast or a famine. To trigger the Fury Spins feature, you need 3, 4 or 5 scatters on the reels. This will give you 10, 15 or 20 free spins respectively. This feature can be re-triggered an unlimited number of times. Once you use all the free spins, you will return to the base game where you can continue spinning the reels in search of new winning combinations. We have found that the best way to win in this game is to run the Fury Spins feature and hope for your luck. So, if you're looking for an exciting slot with great potential for huge winnings, check out Barbarian Fury!

We strongly recommend you to try the demo version of Barbarian Fury before you decide whether to spend real money on the game. The comic book-inspired design is great and opens up great prospects for those who like fantasy-themed games. You'll also find that the original sequel, Warrior Graveyard slot from Nolimit City, is definitely worth checking out if you like this game. Finally, the latest slot from this company is Legion X. This slot boasts an impressive 31,000x maximum winnings and an absolutely full feature set.